These are 10 of the most common myths or misunderstandings about breast cancer.

1. One in eight women will get breast cancer.

This is one of the most misunderstood breast cancer statistics. The one-in-eight statistic doesn’t accurately reflect the average woman’s breast cancer risk. Age is the most important risk factor for breast cancer, so as a woman gets older, her breast cancer risk increases, approaching a one in eight risk after age 70. Statistics from the US National Cancer Institute show that a woman’s chance of being diagnosed with breast cancer in the next 10 years by age is: 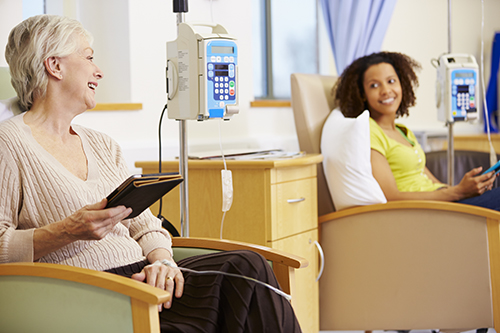 These probabilities are averages for the whole population. An individual woman’s breast cancer risk may be higher or lower, depending on a number of factors, including her family history, reproductive history, race/ethnicity, and other factors that are not yet fully understood. This Breast Cancer Risk Assessment Tool can help you to assess your own risk.

2. All women should do a monthly breast self-exam.

Breast self-exam (BSE) has been widely hailed as a technique that can help women find breast cancer early—with the implication that finding it early will save lives. There’s just one problem: No study ever has found BSE reduces breast cancer deaths. That’s why cancer organizations like the American Cancer Society no longer recommend every woman do a monthly BSE and the US Preventive Services Task Force recommends against teaching women BSE. Many women do find their cancers themselves. But very few find them while doing BSE. More typically, the woman just rolled over in bed, or felt a lump while soaping up in the shower, or had it pointed out by a lover. This is why it is important for women to become acquainted with their breasts, to know what they look like, and to know what lumps and bumps are normal for them. (It’s best to do this soaped up in the shower or bath.) But there’s a crucial difference between doing BSE and getting acquainted with your breasts. BSE is like a search-and-destroy mission. It often makes women tense. And it’s all about trying to find cancer. In contrast, getting acquainted with your breasts gives you a good, integrated sense of your body, which will help you know when something doesn’t feel right. Some women like to do BSE, and that’s fine. But no one should be made to feel guilty for not doing it—especially if they are well acquainted with their breasts.

3. Most women die of breast cancer.

The American Cancer Society estimates that this year 231,840 women and 23,500 men will be diagnosed with invasive breast cancer. An additional 60,290 women will be diagnosed with an in situ cancer—ductal carcinoma in situ (DCIS) or lobular carcinoma in situ (LCIS). An estimated 40,290 women and 440 men will die of breast cancer this year.

4. All women should begin having annual mammograms at age 40.

There is intense disagreement in the U.S. over what age women should begin having mammograms and how often they should have them. The U.S. Preventive Services Task Force recommendations for breast cancer screening state: Between age 50-74: mammography screening once every two years. Before age 50: This should be an individual decision that takes into account the patient’s risk factors and the patient’s values regarding the benefits and harms of breast cancer screening. The problem is women between 40 and 49 typically still have dense breasts, and on a mammogram, this dense breast tissue shows up as white—which is the same color as a cancer appears on a mammogram. With menopause, which typically begins around age 50, the dense tissue in women’s breasts is replaced with fatty tissue, which looks gray on a mammogram. It is much easier to see the white cancer against this gray background. That’s why mammography works better on women aged 50 and older. To date, eight randomized controlled trials have found that mammography screening for women between 40 and 49 had no effect on mortality. Even so, some health organizations continue to recommend annual mammography for women between the ages of 40 and 49. At first glance, there would seem to be little harm in this recommendation. But there is a downside. Many abnormalities seen on mammograms may not be cancer (these are called false positives), but they will prompt additional testing and anxiety. In fact, as many as three out of 10 women who begin annual screening at age 40 will have an abnormal mammogram during the next decade, and the majority of these will end up having biopsies—only to learn that the test was a false positive. The bottom line: Even in older women, mammography is far from a perfect screening tool. It may help you find your cancer early, but finding a cancer “early” is not a guarantee that your life will be saved. The best way to decide when you should begin having mammograms is to discuss your personal risk factors for breast cancer with your physician. Learn more about mammography screening and decision tools that can help you decide when to start screening in our overview of mammography

5. If no one in my family has had breast cancer, I’m not at risk.

When women learn breast cancer can be a genetic disease, they often think this means it is a disease that must be inherited. But that’s not the case. A genetic disease is caused by a genetic mutation that is either inherited or arises spontaneously. Only about 11% of all women who develop breast cancer have a family history of the disease. The other 89% have what is called a “sporadic occurrence,”—meaning there is no known family history of the disease.

Bras—plain or underwire—do not cause breast cancer. In fact, lymphatic fluid from the breast drains directly back toward the chest wall and the armpit, not underneath the breast where the bra might be tight. If you don’t like wearing a bra, don’t wear one. But don’t believe going braless will keep you from getting breast cancer or wearing a bra will increase your risk.

8. There are natural, alternative treatments that can cure cancer.

The National Cancer Institute’s Office of Cancer Complementary and Alternative Medicine distinguishes between complementary medicine, which it defines as any medical system, practice, or product not thought of as standard care but used along with standard medicine, and alternative medicine, which is used in place of standard treatments. Purely alternative approaches include high-dose vitamin therapy, antineoplastons, macrobiotic diet, some herbal remedies, metabolic therapies, and detoxification. The use of these therapies is often based on certain beliefs that may not be totally accurate. One such belief is the body has self-healing properties. This is true—but only to a point. The body does have defense mechanisms that we try to supplement in cancer therapy and there certainly is a mind–body connection, but there are also forces beyond our control. Another belief is that certain things can increase the immune system and help cure a cancer. Again, there’s some truth in this. But there is no known alternative treatment that can cure cancer. For all its limitations, Western medicine is still probably the most important component of any successful effort to cure cancer or to put it into significant remission. But there are complementary therapies that can help during and after the treatment process.

9. All women with breast cancer should have an annual CA 125 test to detect ovarian cancer.

The cancer antigen 125 (CA 125) test measures a protein that may be released when cells in the fallopian tubes, uterus, cervix, or the lining of the chest and abdominal cavities are inflamed or damaged. Ovarian cancer cells often produce an excess amount of this protein. The problem is elevated levels of the protein are also found in women in the first trimester of pregnancy as well as in women who are menstruating or who have endometriosis. Also, not all women with ovarian cancer have high levels of CA 125. In early stage ovarian cancer, the CA 125 level may not be elevated, and about 20% of women with advanced ovarian cancer never have elevated CA 125 levels. Because the CA 125 test can be elevated when cancer is not present, and be low when cancer is present, it can result in both false positive and false negative results. This is why it is not used as a screening test for ovarian cancer. There are times when the CA 125 test should be used. Women with a strong family history of breast or ovarian cancer are believed to be at highest risk for developing the disease—as well as developing it before age 50—and doctors recommend CA 125 testing for this group of women. The CA 125 test also is a regular part of the follow-up of women who have already been diagnosed with ovarian cancer. For these women, CA 125 testing can provide information about whether a recurrence has occurred or if the tumor is responding to the cancer treatment. The best way for a woman to increase her chances of having ovarian cancer found early is to have an annual pelvic exam as well as an annual rectovaginal exam in which the physician inserts fingers in the rectum and vagina simultaneously. Women also need to be aware of the early symptoms of ovarian cancer, which include abdominal pressure, bloating or discomfort, abdominal swelling, nausea, indigestion or gas, urinary frequency, constipation or diarrhea, abnormal bleeding, unusual fatigue, and shortness of breath, and should contact their doctor if these symptoms just don’t go away. The lack of a screening test and the difficulty in diagnosing ovarian cancer are the reasons why 75% of women are diagnosed in later stages of the disease, when it is harder to treat. So even though ovarian cancer is relatively rare—approximately 25,000 new cases are diagnosed annually—it is the gynecological cancer with the highest mortality rate. It is frustrating there currently is not a screening test—like the Pap test for cervical cancer or mammography for breast cancer—to detect ovarian cancer early. But the CA 125 test is not the answer to the problem. It is just not a good screening test, and it should not be promoted as if it were.

10. Breastfeeding is dangerous because breast milk can carry cancer cells that can harm the baby.