Breast Cancer Over the Years by Dr. Susan Love 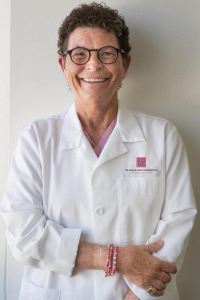 There is something about living in the midst of a pandemic that makes you reflect on what has come before us and what our future will be. When I was training as a surgeon 40 years ago, if a woman was found to have a breast lump, we would schedule her for surgery. At the start of the surgery, which was done under anesthesia, we would do a biopsy. If she didn’t have cancer, the surgery ended. If she did, we would proceed with a radical mastectomy, a surgical procedure that would not only remove the whole breast but the underlying pectoralis muscles, as well as all of the lymph nodes under the arm. If the tumor was towards the center of the breast, a segment of ribs might also be removed, so that we could remove the nodes that sit between them and the lungs. It wasn’t until the anesthesia wore off, that a woman learned if she still had her breast.

Thanks to several pioneering breast surgeons in Italy who were willing to question this approach, a randomized clinical trial was started in which half of the patients had a radical mastectomy and the other half had a partial mastectomy that removed about one-fourth of the breast tissue followed by radiation. Brave women enrolled, and then the surgeons studied the data. They discovered there was no difference in the outcomes of the two groups, and that the less extensive surgery was just as good! Many American surgeons weren’t willing to accept the results. They argued that while this may have worked in Italy, it would never work in the U.S.

The breast surgeon Bernard Fisher didn’t agree. So, he organized a clinical trial through the National Surgical Adjuvant Breast and Bowel Project in which women in the U.S. were randomly assigned to either a wide excision surgery followed by radiation or a modified radical mastectomy. Again, with extensive follow up, there was no difference! It was clear that the long-held belief that you needed to do more surgery to have a better outcome was not true. This led researchers to hypothesize that cancer cells were able to escape from the breast into the bloodstream way before we are able to detect them — which we now know is true. We also now know that it is those cells that escape early on that lead to the metastases that are the primary cause of breast cancer deaths.

Before long, we also realized that there were different types of breast tumors. The first big discovery was that some were sensitive to estrogen and that hormone-blocking drugs could often keep these tumors in check. Again, we owe gratitude to the many women who agreed to take part in the clinical trials that led to the approval of tamoxifen and the aromatase inhibitors used to treat these tumors.

When I wrote the first edition of my book, I made an effort to explain to women why rushing into surgery and having a single or double mastectomy would not ensure their survival. Now, things have advanced even further, and I’m telling women they likely won’t have surgery until they have first been given chemotherapy, targeted therapy, or hormone therapy to both shrink the tumor and see what types of drugs it responds to.

As I reflect on my career, I can’t help but think about the fact that I became a breast surgeon because it was the first-line of treatment and we had evidence to show it was effective. I never, ever imagined that we would learn surgery might be the least important factor in treating the disease. That’s why I love science! You never know what the future will bring!