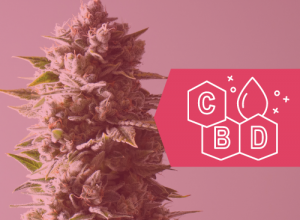 As states reduce restrictions around cannabis*, medical and recreational use are increasing in the United States. Unfortunately, there are no large, prospectively designed, randomized clinical trials conducted in humans to guide our knowledge of cannabis use. Without that highest level of research, any sweeping claims—for or against—should be met with skepticism. Much of our collective knowledge stems from case reports, animal studies, or retrospective observations—all of which fall short of the standard we expect for best breast cancer care and decision making.

After politics and medicine intersected, cannabis was made illegal and it remained so for decades. In 1986, Marinol became the first cannabinoid-based product to gain FDA approval for chemotherapy-associated nausea and AIDS mediated weight loss. But studies quickly suggested that users found it less effective than smoking cannabis for control of nausea.

There is more robust data, borne of the opiate crisis, looking at the role of cannabis as an alternative pain control or as an additive to improve opioid pain controls’ efficacy. Most of this data shows a clear improvement in pain, possibly even for hard-to-treat neuropathic pain syndromes. In fact, a 24 percent reduction in opioid-related deaths has been shown in states with legalized medical marijuana programs.1But gaining more good data will be hard. Although legal cannabis use is increasing, it remains difficult to conduct cannabis research. Many patients underreport their use, fearful of a negative reacation from their health care providers, and many physicians fail to ask their patients whether they are using cannabis..

Whether cannabis really might be a cancer treatment isn’t clear. Some animal model studies have suggested that cannabinoids accelerate tumor growth and shorten survival, while others suggest that cannabis may be slow tumor growth. Findings from a 2019 study  suggested that because cannabis has a suppressive effect on the immune system, it might make immunotherapy treatments less effective.3 Cannabis may also be a radiation sensitizer. This could be good (better tumor response) or bad (worse toxicity).

To date, the clinical trials looking at cannabis/THC have included fewer than 100 patients and most have looked at patients with cancers other than breast cancer. This leaves us at a familiar intersection: Communication. We need patients to trust their physicians enough to tell them about their cannabis use. And we need physicians to become educated about cannabis and cancer so that they can feel comfortable both bringing up the topic and responding to their patients’ questions. If you don’t feel like your oncologist can provide your with the support you need to have a discussion about cannabis, you may want to speak with another oncologist, possibly a palliative care or integrative oncologist, who is likely to be more comfortable with and informed about the topic.

*I am using the word “cannabis” because the word “marijuana” has a racist history and its use is being discouraged. For more on the history of the word, see this article by Alex Halperin in The Guardian: https://www.theguardian.com/society/2018/jan/29/marijuana-name-cannabis-racism