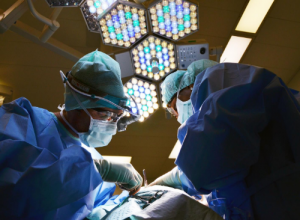 The surgeries I performed were influenced by the findings from the two large randomized controlled studies that found women who had a lumpectomy and radiation had the same survival rates as women who a mastectomy, and also retained some sensation in their breast.

When I was practicing, chemotherapy was used after surgery. But after we learned that cancer cells get out into the bloodstream much earlier than we had thought, it became more commonplace to use systemic therapy before surgery. This allows oncologists to shrink the tumor and allows more women to have a lumpectomy. It also allows oncologists to learn whether or not the tumor responds to certain types of chemotherapy. Even so, many women still choose to have a mastectomy, and sometimes and even a bilateral mastectomy, hoping that removing more breast tissue will lead to a better outcome. (The research doesn’t show that it does, though.)

Either surgery will result in collateral damage.  A cosmetic lumpectomy is more difficult for a surgeon to do than a mastectomy, and unless the surgeon has trained in oncoplastic surgery, the resulting breast will have sensation but might not match the other one. A double mastectomy with reconstruction can result in reasonable looking breasts but, even if you use your own tissue, you will not have much sensation. Some women choose to have a single or double mastectomy and stay flat, rather than having reconstruction. This, too, is another good option.

Initially, only silicone implants were often used for reconstruction. Then, textured implants began to be used for breast reconstruction after a mastectomy, for breast cancer prevention, or for transgender surgery because there were believed to stay in place better. Recently, we learned that textured implants — whether they are filled with silicone or saline — can cause a rare type of blood cancer called implant-associated anaplastic large cell lymphoma. It is not common and generally progresses slowly, but it can spread to the lymph nodes and it can be fatal.

Symptoms of this rare cancer include lumps, pain, redness, or changes in the breast size and shape. Studies show that this cancer tends to appear about eight years after the implants are placed. It can be detected by ultrasound or MRI, followed by a needle biopsy. Testing the fluid around the implant can also indicate whether this cancer might be present. Generally, the treatment is to remove the implant and its capsule. In some cases, chemotherapy may also be necessary.

We don’t typically think of collateral damage as an increased risk for a new type of cancer. But as you decide what type of breast surgery to have and whether or not to have reconstruction or what type of reconstruction to have, it is something that should be taken into account.