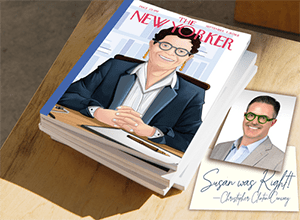 While Dr. Susan Love is not on the cover of this month’s The New Yorker, Malcolm Gladwell did recently confess his regret for his treatment of Dr. Love many years ago in that esteemed publication.

Gladwell, author of six New York Times bestsellers, was interviewed by Dan Harris on the August 15 Ten Percent Happier Podcast about topics such as kindness, generosity, and regrets. The podcast was a mindful and thought-provoking episode. For those of you listening at home, make note around the 53-minute mark when he is asked this question: “What have you ever been wrong about?”

Gladwell responds, “The category of wrong that’s most meaningful is where you make the mistake of drawing a declarative conclusion about something where no declarative conclusion is called for, so where knowledge is evolving — either the world’s knowledge or your own knowledge.” He then refers to Dr. Love, recalling a piece he wrote for The New Yorker in 1997, which he “regrets to this day.”

Gladwell wrote his piece shortly after Dr. Love took a stand against hormone replacement therapy in post-menopausal women. In the article, he questioned Dr. Love’s credibility and trustworthiness — she felt that the right studies weren’t being done and that they were untested and potentially dangerous. Despite his lack of medical training or even substantive study of the subject, Gladwell belittled Dr. Love for standing up to what was then the current scientific consensus. But as she has been so many times, Dr. Love was ahead of everyone else. And now, after the definitive studies have been published, Gladwell admits on the podcast, “Lo and behold, Dr. Susan Love was right.”

In research and science, there are few definitive answers. Science is ever-changing, and we continually learn new things that force us to call into question what we believed to be true before. We must also continue to ask the difficult questions and be willing to buck the status quo. We commend Dr. Love for asking those hard questions, standing up when she knows she’s right, and for always advocating for research. It’s great that Gladwell admitted his mistake in the podcast. But Dr. love is still waiting for his apology.