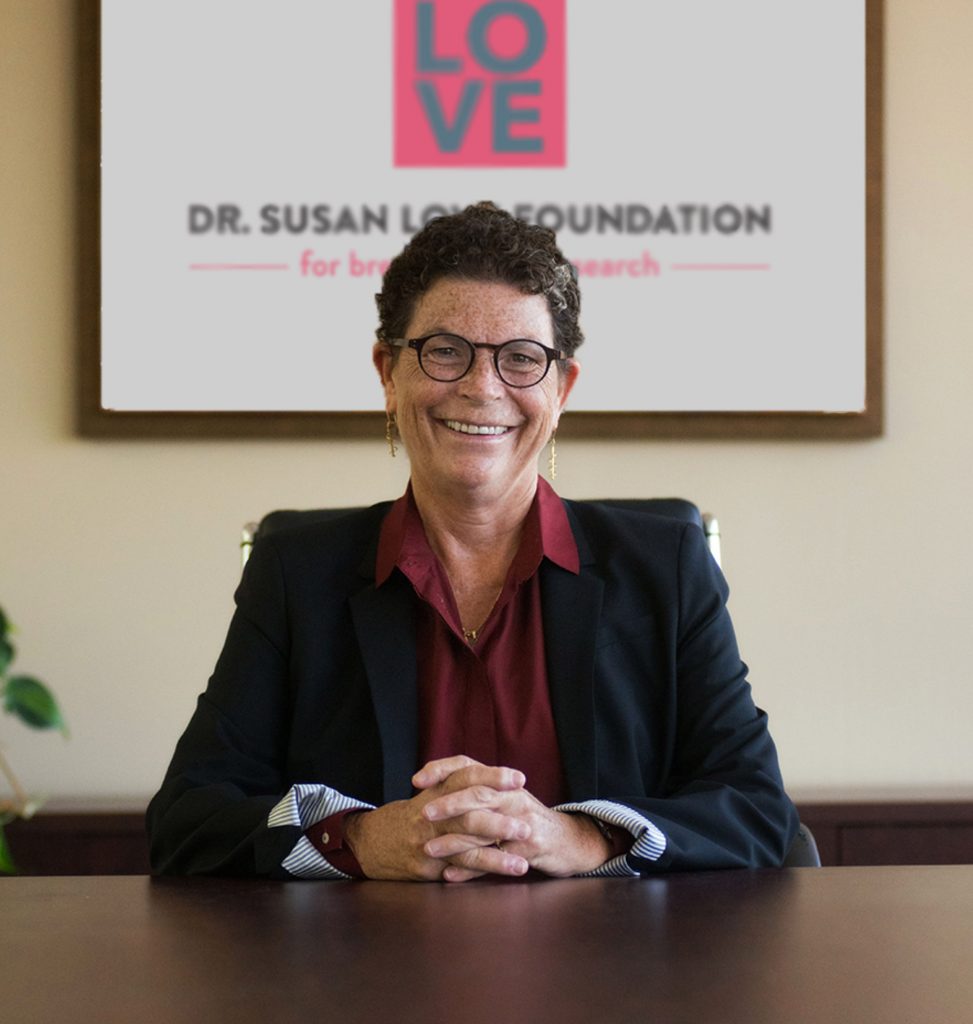 Susan M. Love, MD, MBA has dedicated her professional life to ending breast cancer. As Founder and Chief Visionary Officer of Dr. Susan Love Foundation for Breast Cancer Research, she oversees an active research program centered on finding breast cancer cause and prevention. Prior to this role, she was a Clinical Professor of Surgery at UCLA’s David Geffen School of Medicine and a founder and senior partner in LLuminari, a multimedia women’s health company.

Susan Love was born in New Jersey and grew up in Puerto Rico and Mexico, where she attended Catholic schools and developed an interest in science. After her second year of pre-med studies at Notre Dame of Baltimore, Love was drawn to the religious life and entered the convent. After six months she left, realizing that it was not her calling, and enrolled in Fordham University in New York, to continue her studies. In the 1970s, medical schools were still admitting few women, perhaps 10 percent of the class, but Love, who was elected to Alpha Omega Alpha and graduating cum laude, was among the five women who were the top graduates from the State University of New York’s Downstate Medical School in 1974. Dr. Love went on to do her surgical training at Boston’s Beth Israel Hospital where she founded the Faulkner Breast Center and later the Revlon UCLA Breast Center in Los Angeles.

Dr. Love has tackled controversial topics in her professional and personal life, in her criticism of the medical establishment’s treatment of women, her advocacy of cancer surgery that conserves as much breast tissue as possible, and her fight to expand the rights of same-sex couples as parents. She was lead author on a pioneering article for a 1982 issue of the New England Journal of Medicine, in which she and her team of writers challenged the diagnosis of fibrocystic disease of the breast, questioning a purported link to breast cancer and demonstrating that fibrocystic disease was not actually a disease at all, and should not be used to determine the need for surgery of the breast.

Love has a business degree from the Executive MBA program at UCLA’s Anderson School. In 1996, she retired from the active practice of surgery, to dedicate her time to the urgent pursuit of finding the cause and prevention of breast cancer. She has done this in the private and nonprofit arenas including creating several medical device companies based on the intraductal approach to the breast. 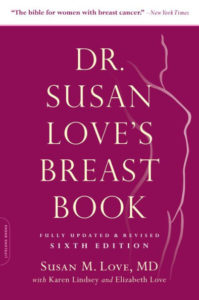 Dr. Susan Love is best-known as a trusted guide to women worldwide through her books, the Foundation website and social media. The completely revised sixth edition of  Dr. Susan Love’s Breast Book termed “the bible for women with breast cancer” by The New York Times was released October 2010. It has been translated into German, Dutch, Chinese, Japanese, Spanish, and Hebrew. Dr. Susan Love’s Menopause and Hormone Book, first published in 1998 and revised in 2003, was one of the first to sound the alarm against the long-term use of postmenopausal hormones. Live a Little (Crown 2009) encourages women to take a reasonable approach to becoming healthy.

A true visionary, Susan Love’s recent projects include the Love Research Army, a creative solution to partner people and scientists to accelerate breast cancer research. Since its inception in 2008, the Love Research Army has attracted more than 390,000 members who are willing to consider participating in research to find the cause and prevention of breast cancer. This novel initiative is moving more research from animals to human participants, democratizing the scientific process.

In June of 2012, Susan Love was diagnosed with leukemia and underwent chemotherapy and a stem cell transplant. She returned to work in January of 2013 more determined than ever to find the cause of cancer and end it once and for all.

In 2019, Dr. Susan Love received the Harriet Benjamin Inspiration Award at the Spirit of Community luncheon held by the Cancer Support Community Los Angeles at the Skirball Cultural Center. Dr. Love was honored for her lifetime of work dedicated to the eradication of breast cancer.

Dr. Love’s fierce intellect, unrelenting tenacity, and laser-like focus, has led to some of the world’s more innovative research. From spearheading a partnership with NASA’s Jet Propulsion Laboratory to mapping the breast ductal system, to harnessing the power of artificial intelligence to develop a handheld, self-reading ultrasound for breast cancer screening in underserved populations, Dr. Love’s goal remains simple and clear: to end breast cancer.