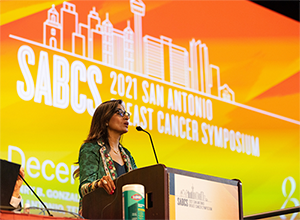 At every large oncology conference, a theme begins to emerge. This is typically driven by factors such as technological advances that shift research interests or the “me too” phenomenon in which drug and biotech companies start making drugs similar to ones that early studies suggest appear promising. These are the three themes I identified at this year’s San Antonio Breast Cancer Symposium — the largest U.S.breast oncology research conference — held every year in December.

We know what we know.

We saw several trial updates that confirmed that data presented earlier was true — the drug or the test that we thought worked really does work!

These trial updates provided long-term data on patient experience, drug safety, and outcomes. These follow-up analyses also allowed researchers to look at smaller subsets of those studied in the clinical trials. For example, researchers reported that in the MONALEESA02 trial, which studied letrozole with or without ribociclib in metastatic breast cancer, every subset benefitted from ribociclib.

In the KEYNOTE studies that looked at adding pembrolizumab to other treatments used for neoadjuvant triple negative breast cancer (KEYNOTE-522) and metastatic triple negative breast cancer (KEYNOTE-355), the longer-term follow-up data showed that the drug continued to work for those who had benefitted initially. This means checkpoint inhibitors — a type of immunotherapy — will continue to be a good option for many people with triple negative breast cancer. We learned from Dr. Sara Hurwitz, who reported an update on the Destiny Breast 03 trial Trastuzumab deruxtecan (T-Dxd), that the data showed that a subset of patients with brain metastasis had a very good response rate, which was not surprising, but good to see. And updates from a surgical trial called SINODAR ONE confirmed that less surgery is reasonable for positive lymph nodes, which we had initially learned from the Z0011 trial. Lastly, an update from the  RxPONDER trial, which looked at the OncotypeDX test in persons with breast cancer that was lymph node positive and hormone positive confirmed that patients with a low recurrence score can safely skip chemotherapy. (Yay! Less collateral damage!) However, it’s still not clear whether premenopausal women with lymph node positive breast cancer will have the same results.  As it stands now, it is probably a gray zone that requires shared decision-making between patient and physician.

New things are always on the horizon.

Neratinib shows promise in Her2 mutant breast cancer (which is surprisingly different from Her2 positive breast cancer). Datopotamab deruxtecan (Dat0DxD), a new antibody drug conjugate (the chemotherapy is attached to a targeted therapy so that it can be delivered directly to the cancer cells) created a lot of buzz and will be moving forward in many subsequent trials. A novel trial design used circulating tumor DNA to determine when to change therapy as a way to potentially outsmart chemotherapy resistance or early cancer growth was interesting, but the concept needs to be tweaked before it is ready for primetime. Elacestrant, the first of many oral selective estrogen receptor degraders (SERDs) to hit the big stage, showed only a modest improvement in survival, but the thought of more oral therapies for hormone receptor positive breast cancer is always exciting.

For the second year in a row, the conference held a powerful session that spotlighted the disparities in breast cancer care and outcomes for Black women and amplified the voices of Black patient advocates and Black physicians. Examples included white women being more likely than Black women to be given their diagnosis in the office than over the phone; Black women being less likely to receive appropriate pain control; and Black applicants receiving lower funding awards for their research. We also saw an abstract on a prospective randomized trial that showed Black race was the number one predictor of lymphedema after axillary lymph node dissection. These and other examples drove home the continued need for a commitment to addressing racism in medicine and advocating for diversity in clinical research.

Because the San Antonio Breast Cancer Symposium is always held in early December, it’s always a quick turn from serious conference talk to the lightness and hope of the holidays and the New Year. As a whole, the experience fills me with energy, ideas, love, and gratitude. I hope you are as fortunate as I am to find purpose in your life’s work and love in your home as we pass into 2022. Happy New Year!