Breast cancer is the leading cause of cancer death among women, especially young women, in low- and middle-income countries (LMIC). In 2016, National Institutes of Health (NIH) awarded a $3 million grant to Dr. Susan Love Foundation for Breast Cancer Research to continue the development of a technology aimed at addressing this serious issue for women’s health. The three-year UH3 Phase II exploratory cooperative agreement will support work to further test a computer-assisted diagnosis triage (CADt) software product that can triage palpable breast lumps and identify those that are suspicious. This technology, when used in conjunction with handheld ultrasound units by local health aides, will quickly determine which lumps are benign and those which might be malignant and should be biopsied. The $3 million Phase II award comes after a successful $1 million Phase I for an award total of $4 million.

I’m excited to update you on one of our biggest projects to date, our Self-Reading Ultrasound research funded by the National Institutes of Health (NIH)!

But here’s the thing: Most of the lumps these young women feel and tell their doctors about are actually benign (not cancer). This is, in part, because all of the hormones that stimulate the breast in premenopausal women can cause lumps. In the U.S., if someone has a lump that can be felt, the doctor will typically do an imaging exam and then do a biopsy to make sure it is benign.  But if you are in a place where resources are limited, it can be difficult to get to a place where imaging is available or doctors are able to perform a biopsy and analyze the results.

There are basically four kinds of common lumps you can feel in your breast: fluid-filled cysts, fibroadenomas, fibrocystic disease (lumpy breast tissue), and cancer. Although they often seem similar when felt with your fingers, they look very different when seen on an ultrasound. This is where our project comes in. We are using a handheld ultrasound machine that looks like one of those larger, old cell phones. The handheld machine, which can be used by a trained health care worker, has the ability to transfer the image to a laptop and can use artificial intelligence (computer programs trained to differentiate between the different types of lumps) to determine right then and there what type of lump it is! Within minutes, a health care worker would be able to inform a woman if the lump was benign or something that looks suspicious and requires her to see a doctor for more testing.

Of course, there are many steps from having a brilliant idea to making it work. First, we had to get funding, which we got from the NIH. Then, we trained artificial intelligence, using ultrasound images available to us in databases and books. It is an interesting process. You don’t teach the artificial intelligence the same way you would train a person. Instead, you show it a lot of lumps on ultrasound where you know the answer, and it decides what is relevant or not. After that, we tested the AI on ultrasound images collected from women in Los Angeles being referred for evaluation of palpable lumps at county hospitals, using a machine loaned to us by General Electric (GE) (Logiq e).

We then conducted a pilot study in Guadalajara, Mexico, using a handheld ultrasound machine loaned to us by GE (Vscan Dual Probe). This study was to see if health care workers without training in radiology could effectively use the device. So, I trained three health care workers there on how to take ultrasound pictures vertically and horizontally of palpable lumps. Then we had them take images of the palpable lumps found in women who were on a waiting list to have a mammogram and ultrasound at the hospital. The waitlist was due to a shortage of radiologists. Not only were they able to acquire the images, but the health care worker’s images were as good as the images taken by the radiologists who used our handheld ultrasound machine. And most exciting both of the cancers were identified by the artificial intelligence software and none were missed. There were also 12 lumps that the radiologist referred for biopsy that our artificial intelligence correctly identified as benign. This means that our artificial intelligence software could potentially have saved 12 women from having unnecessary biopsies! And the work is getting international attention. Our paper on our research project was just published online in the Journal of Global Oncology. 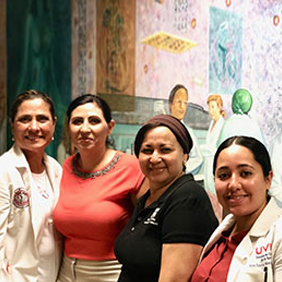 We are now in phase two of our study, which involves collecting images on a new portable ultrasound machine loaned to us by GE (Vscan) and a standard ultrasound in Guadalajara on 500 women who have a palpable breast lump to continue training the artificial intelligence. Each woman’s treatment will be decided by the radiologist. To date, we have enrolled 245 women in the study. After we complete phase two and are certain our artificial intelligence gives accurate information, we will launch a validation study. This study, which will also take place in Guadalajara, will use the GE Vscan ultrasound and our artificial intelligence to determine the treatment of 600 women who have a breast lump. Their treatment will be guided by the artificial intelligence, and we will follow the women who we decide have benign lumps with a repeat ultrasound in six months to make sure the lump was benign and, if not, that they receive appropriate treatment. We are very excited about this work and hope it can improve the care for women everywhere! 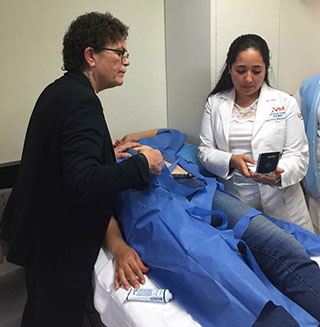 The handheld machine, which can be used by a trained health care worker, has the ability to transfer the image to a laptop.