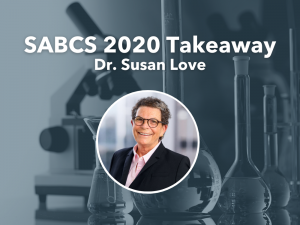 The San Antonio Breast Cancer Meeting was a bit different this year. The biggest change was that it was virtual so that you could stay in your sweatpants and watch while eating breakfast. Missing were the cocktail parties and other chances to catch up with friends and colleagues.

Overall it felt to me like the meeting marked a sea change in the approach to breast cancer treatment. When I started long ago, the approach was to rush in for an emergency biopsy and then surgery to remove the breast with cancer in hopes that we could prevent it from spreading to the rest of the body through the lymph nodes. If the tumor was big or the nodes showed cancer we added drug therapy either chemotherapy or hormonal. The first hint that surgery and particularly aggressive surgery may not be the key came from studies showing that more surgery ie radical mastectomy was no better than less (lumpectomy and radiation).

The next step was adding drugs such as chemotherapy, hormonal therapy, and later Her2 neu blockers to try and kill any cells that may have escaped. Neoadjuvant systemic therapy (drugs given before surgery) gained prominence with the I Spy trial which flipped the order of therapies. After a needle biopsy confirmed that an abnormality was cancer the cells were analyzed to determine which subtype it was based on the hormone receptors and Her 2 neu. The patient then received the appropriate drug for their tumor not unlike matching the right antibiotic to the specific bacteria causing an infection. This approach allowed the doctors to see if the tumor responded by decreasing in size. Not only was this approach helpful in identifying the best drug treatments for a particular tumor, it delivered it to any cells that might have already escaped by then. Surgery and radiation were then added as clean up. This approach is now the norm for all but very small tumors and has proved very successful. It has also allowed us to identify new molecular subtypes and corresponding targeted drugs.

I came away from the meeting with the feeling that the approach to breast cancer had become much more like that of infectious diseases. With infections, the key is to identify the cause and then find the drug that will treat it.  If the infection does not respond, then it is resampled to see if there is another bacteria that can be addressed with a different drug. One could argue that this could be an argument for not rushing into surgery after a positive biopsy but to leave it for clean up after the key drug therapies have been tried.