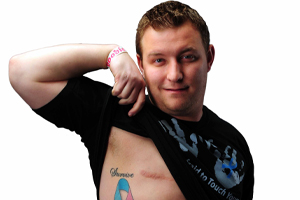 “Don’t take life too seriously. You’ll never get out of it alive.” ~ Elbert Hubbard

This is one of my favorite quotes, I first heard it in the movie Van Wilder.

In August 2003, I was a typical 17-year-old guy. A senior in high school, on the football team, working at the pool and ice rink. There was something a little unusual though. One day I scratched my chest and felt a lump behind my right nipple. We had no medical insurance at the time, so at a school physical night, I asked two doctors to check out the lump. Both doctors weren’t concerned. All they said was “Let’s keep an eye on this…it’s a calcium build up…you’re becoming a man…it would go away.” Well, that never happened.

Seven years later I got a job right out of college managing the pool and ice rink I worked at before college. When I qualified for health insurance, I made an appointment for a check-up. I asked the doctor to look at the lump on my breast and he immediately suggested I go for a sonogram. Once the doctor on call, a female, came in to look at the scan, she suggested that I also have a mammogram. A few weeks later on April 27th, 2010 the lump was removed.

This doctor didn’t seem concerned either, so I still didn’t think anything could be wrong. I thought since the lump was gone I was all good.

The very next day, I was in the parking lot of the country club about to head home when my cell rang. It was the doctor and he told me I had breast cancer. He just blurted out the words, “You Have Breast Cancer,” and said he’d call back in 3-5 days after looking more closely at the pathology report. Gee, thanks doc, leave me hanging there for a few days. I thought I was getting punk’d and Ashton Kutcher was going to come out from between the cars with the cameras or something. There wasn’t an immediate call back after the doctor hung up, so I realized this was no joke.

I first called my dad and told him, I asked him not to tell mom as I was going to work and couldn’t talk much. I said we can discuss more when I get home. That didn’t last long, 5 minutes later, mamma bear calls and asks about 1,000 questions in 30 seconds. Needless to say, after Peggy Miller got wind of this we met with the surgeon the next day!

About a week went by after meeting with doctors, plastic surgeons, and oncologists; like most people my age, I posted my breast cancer news on Facebook.  I wrote about my diagnosis, upcoming surgery, and chemo plans. It was the easiest way to let my friends know without having to tell them face to face.

On May 18th, 2010 I had a mastectomy. Along with breast tissue, my nipple and four lymph nodes in a one-inch margin around the nipple were removed. Because of my scar, everyone says it looks like I am forever winking at them ( – )(  ).

After a quick and successful surgery, I was given the very good news that with the margins taken out all the cancer was gone! The cancer was caught very early and was classified as Stage 1.

Following the mastectomy, I went through four rounds of chemotherapy and am free and clear of cancer for good, I hope!!

Originally, there were no plans for chemo. Because the lump was small, classified as stage 1, and following the mastectomy and testing the lymph nodes nothing had spread, chemo was not required but was an option. My doctors did tell me about a new test called OncoType DX, it breaks down the tumor on a genomic level. This helped the doctors determine if I needed chemo, if so what type and would also let me know the possibility of cancer coming back within a 10-year span. The results were that I would benefit from chemotherapy. The test said I had a 22% chance of cancer, of any sort, coming back and that doing chemotherapy could possibly drop those chances by 10%.  I said “Yes” without hesitation. What are four rounds of chemo that might be painful for several months but could potentially erase the chances of cancer coming back? I want to live a long full life with no more interruptions! People asked, “Are you worried about losing your hair?” my reaction, “Really?!” I just lost a nipple, my hair will grow back.

I never thought it was possible for a man to get a woman’s disease, but I know now that’s not true. I have no direct family history of breast cancer, I do not have BRCA 1 or BRCA 2 gene mutation nor any other mutations. As of September 3rd, 2020 my prognosis is still clear of cancer!

My mission now is to spread the word to everyone, men and women, young and old, that breast cancer does not discriminate, it can happen to anyone at any age and to MEN too!

A couple of months following my mastectomy, I started The Bret Miller 1T Foundation with the help of my parents Peggy & Bob Miller. Only 1 T in my name and now 1 Tit and 1 Nipple for those keeping track…. (have to have some humor every now n’ then). The goal of the foundation is to raise awareness in colleges and high schools telling our youth that breast cancer can happen to anyone!  Male breast cancer survivors share their journeys and let students know they are their own best advocates for their bodies.  We tell people if they find something that doesn’t feel right they must talk with a doctor, do not ignore anything. If you don’t like the answer given to you, get a second, third, or fourth opinion. Do not rest until you get the answers you want. Early detection is the first step in the fight against breast cancer!

In 2014, I connected with Cheri Ambrose via social media, and together we created the Male Breast Cancer Coalition. Cheri is one of my angels we met along the way. She had a dear friend who was diagnosed with male breast cancer and was treated the same way I was… Our goal is for no man to ever feel alone when he hears the words “You have breast cancer.”

Since my diagnosis, I have always been open to talking about my breast cancer. This is something I think was meant to happen to me so that I could help others.

My goal and mission in life now is to spread the word to EVERYONE that men can get breast cancer TOO!!

With the help of social media, my story has been successfully shared across the US, but none was bigger than being on Good Morning America. I now feel as if my story has gone global. The way GMA put together my story with the help of Dr. Jennifer Ashton brought light to the issue we as men face, there aren’t many doctors talking about men with breast cancer or the fact that they can even get it. Combine GMA with ABC’s “A Million Little Things” and we have a story that can’t be stopped. I am forever grateful to ABC for helping us men gain a voice in the fight against breast cancer.

I would like to take the end of this to thank Cheri Ambrose (co-founder), Peggy (Mom), Bob (Dad), Blake (Brother), Bobby (Brother), Morgan (Sister), Tasha Miller (Wife), and the new girl in my life my daughter Riley Sue, for all their love and support over the last 10 years. I know for a fact without you all none of this would be possible.

Please help raise awareness and visit the Male Breast Cancer Coalition. Without your help, men won’t know what symptoms to look for and some won’t be as lucky as me. About 450 men a year die from breast cancer and early detection can help.