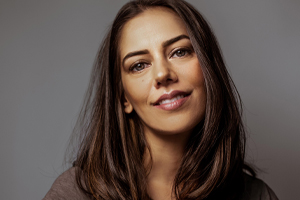 Sheetal Sheth is an acclaimed actress, producer, and author. She is known for her provocative performances in a wide range of memorable roles in film and television. She has starred in over 20 feature films and many TV shows and has earned a loyal, international following. She is also a seasoned voice-over artist. Sheetal has become a favorite in the independent film world, having won five best actress awards on the festival circuit. In 2012, fans voted her ‘Favorite Movie Actress’ in AfterEllen’s Visibility Awards. She is currently in post-production on the feature, HUMMINGBIRD, which she also produced. Sheetal has represented brands such as CHI hair care and Reebok. She is known as an outspoken advocate and has delivered talks and keynotes at festivals and charity galas. She’s had op-eds published on CNN and Thrive Global. She served in President Clinton’s AmeriCorps and is currently on the advisory board of Equality Now and an ambassador for CA First Partner, Jennifer Newsom’s, The Representation Project. Her first children’s book, Always Anjali was published in 2018 to wide acclaim and several printings. It won the 2019 Purple Dragonfly Storybook Grand Prize (voted on by teachers and librarians) and is set to be a series.

In Her Own Words…
I’ll never forget the day of my biopsies. It was December 21, 2018. I stepped into a packed waiting room and was stunned by a blur of pink. There was a literal sea of pink medical gowns on women of all ages, backgrounds, and dispositions. United in anxiety. My day had gone from a ‘suspicious’ mammogram at 7:30 am to ‘must have biopsies’ that same afternoon. It progressed so fast, I couldn’t even comprehend what was happening. It was unthinkable that I would be diagnosed with cancer a few days later.

It has been almost two years since my breast cancer diagnosis. I have had a double mastectomy, reconstruction, 12 rounds of chemo, and a year of cancer treatment, some of which during this pandemic. It was one of the hardest times of my life. That’s what cancer does. It’s surreal and it shatters. It rips you raw. But we dig deep. And persevere in power. With grief and so much gratitude.

To read her article published with CNN on dealing with breast cancer during COVID-19, click here.