Dr. Vanessa Sheppard and her research team at Georgetown University have been collaborating with Dr. Susan Love Foundation for Breast Cancer Research’s Love Research Army for study recruitment for over six years. The Army helped her team recruit for several studies, including the Protocol for Narrowing the Gap in Adjuvant Therapy (GAP) Study in 2009, the Stepping STONE (Survivors Taking on Nutrition & Exercise) Study in 2011, and most recently the Women’s Hormonal Therapy Initiation and Persistence (WHIP) Study in 2014.

“The Love Research Army was an affordable, accessible, and uncomplicated method to identify potentially eligible breast cancer patients. We were able to successfully identify newly diagnosed women, interview them, and receive the medical records. With a limited budget – the Army was a critical catalyst to our meeting our recruitment goal.”

The Women’s Hormonal Therapy Initiation and Persistence (WHIP) Study investigated how women taking hormonal therapy feel about their medication and how that leads to medication adherence. Study participants were asked to complete three follow up questionnaires after treatment initiation over the course of 36 months. They were also asked to provide a saliva sample using an at-home saliva kit provided by the research team. The team’s accrual goal for the Love Research Army was 300 women with any stage of ER+ breast cancer who were prescribed and/or taking hormonal therapy. The Call to Action email for this study was sent to the Love Research Army members in August 2014. Within 12 hours, 683 women signed up for the study, with a total of 1,026 women signing up in the first week!

Due to the overwhelming success during the initial recruitment period, the research team decided to continue their recruitment efforts with the Love Research Army. Women from every state in the US signed up for this study, with the largest number of women coming from California, New York, Florida, Virginia, and Texas. 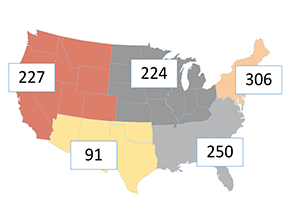 In addition to the most recent study, we have successfully collaborated with Dr. Sheppard on her past studies. The GAP Study sought to gather information to better understand the differences in breast cancer treatment experiences between African American women and White women. Her team wanted to know more about how to improve the survival rates of women with breast cancer. The research team was looking for women who had been newly diagnosed with breast cancer to participate in this study. Participants in the GAP Study were asked to complete a telephone survey about their health related experiences and allow the research team access to their medical records. By the end of recruitment in August 2011, 239 Love Research Army members had signed up for the study.

“The Love Research Army has made a significant impact on my research studies. With the Narrowing the Gap Study within two weeks we reached 116 women – this would have taken months. We also conducted a proof of principle that it is possible to abstract medical records from women across the US.”

Also in 2011, Dr. Sheppard engaged the Love Research Army to recruit for the Stepping STONE Study to look at the effectiveness of an exercise and nutrition program developed by researchers at Georgetown University. They wanted to see if this program would help African American breast cancer survivors increase their physical activity and improvetheir diet. For this study, the research team needed African American women who had been diagnosed with breast cancer, with a BMI of 20-40, living in the Washington DC area to participate in this study. At the end of recruitment in February of 2013, 23 Love Research Army participants had signed up for this study. We are so grateful to have worked with Dr. Sheppard and her team and are looking forward to working with them again on future studies.

If you want to get in contact with Dr. Sheppard and learn more about her past and current research, visit her webpage: https://medschool.vcu.edu/expertise/detail.html?id=vlbsheppard