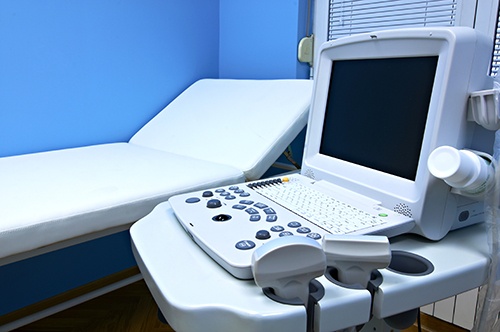 Ultrasound uses a high-frequency sound wave to create a picture of the inside of the breast. A gel is put on the breast to make it slippery and to make sure that air doesn’t interfere with the sound waves passing to and from the tissue being examined, and a small device (a transducer) is slid along the skin to send sound waves to the imaging machine to create a picture. If you had a sonogram while you were pregnant, your doctor was sending sound waves to your uterus to get a picture of the baby.

If the doctor feels a lump and the mammogram shows dense breast tissue, the ultrasound may be able to find the lump within the dense breast tissue. A doctor should always do a diagnostic ultrasound before inserting a needle into the lump. If a diagnostic ultrasound is done after a needle has been inserted into a lump, it can give the ultrasound some characteristics of a malignant lump, which would require it to be removed. The exception would be a patient who is known to have cysts and in whom a painful lump has appeared suddenly, since only benign fluid can form a lump that fast.

Is Ultrasound Better than Mammography?